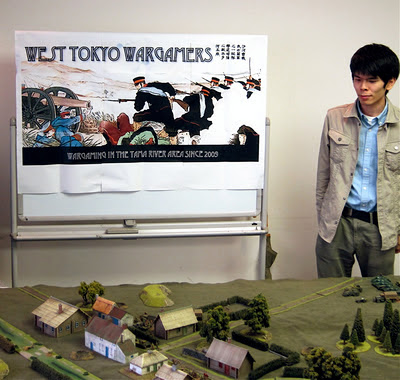 And lots of fun it was too!  En Yu Kai (loosely translated as The Playing Monkey Group... love that name!) are a group of Japanese historical boardgamers located in the Tokyo area.  Board wargames have long been popular here, with a good number of games available, both those published in Japan, and those which would be familiar to anyone acquainted with strategy and tactical board games available in the west.

A few weeks ago they invited us to put on a game at their annual convention held this weekend in Funabori, in the east of Tokyo.

We gladly accepted, so a small group of us agreed to put on a WW2 Blitzkrieg Commander game for the first day of the event. We were looking forward to the opportunity to meet new people, publicize the club, and perhaps to introduce miniatures gaming to those who were unfamiliar with it.

When we arrived at the hall on Saturday, we were given a very warm welcome by our host, Toshikazu Takasawa, and everyone in attendance received a bag of free dice- always useful for those BKC and Black Powder games! 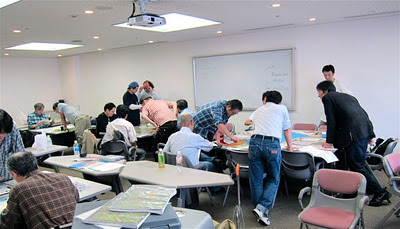 There were lots of old Avalon Hill and SPI games in evidence, along with newer games. I remember seeing a group playing Age of Napoleon, and others included an Arnhem and (huge!) Persian Gulf naval game, as well as a gorgeously presented ACW game.

In our side of the hall was a WW2 Eastern Front game, Operation Typhoon. This was notable for the frequent shouts of triumph and dismay which often came from their corner of the room! They really seemed to be enjoying themselves.
For our game, Giovanni had brought his Germans, and also dragged along his brother (also an avid gamer and painter in his own right) who was visiting from Turin.

I brought my Soviets, and some buildings which I had recently (Friday!) finished painting, and Sada provided some magnificent roads and a very eye-catching river.  He also made a great banner for the club based on our blog header! Also in attendance was Sawamoto-san, who arrived in time to pull some irons out of the fire for the Soviet side.

We also had some members of En Yu Kai participate in the game, and the Konigstigers were commanded by a first-time miniatures players who managed to destroy the better part of a Soviet tank battalion in the course of the game! 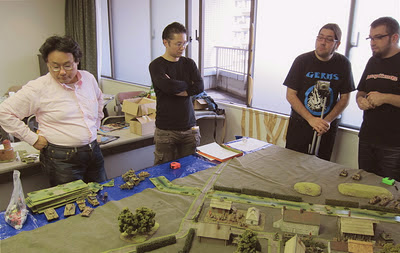 Good vibes all round, with lots of laughter and a very friendly atmosphere. A number of people came up to us during the day to look at the miniatures and terrain, and to "talk shop".

Clearly there were some very knowledgeable people there, who knew their Su-122's from their T-34's.  A number mentioned having built model kits in their youth, and some had even played simple war games with them (some nostalgic discussions about the old Eidai kits!).  But most had not given much thought to miniature wargaming, and this was their first chance to see one "in the flesh"! And what of the game itself?  Actually our Battle of Funaborisov must be counted as of the best BKC II games we've had, and it was a real nail-biter to the finish.  We decided to try the breakout scenario in the rulebook, which saw a German detachment trying to break through a Soviet-held town, while on the other side of the table a German relief force was on the way.  It was a great scenario, and provided a challenge for both sides, as well as a lot of tension! 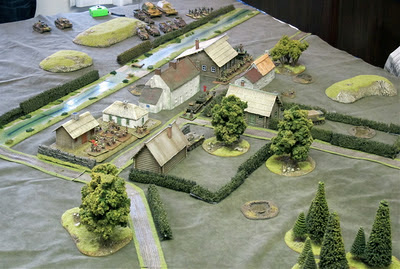 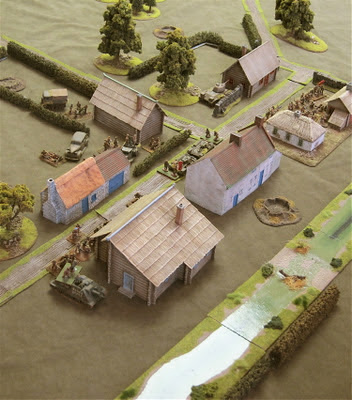 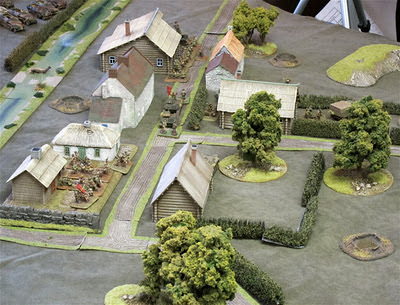 We added a curve ball in that the Soviets would dice to see what turn an armoured column would come in to reinforce the defence.  As luck would have it, the Soviet reinforcements would come in on the second turn... 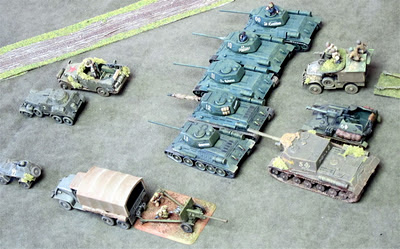 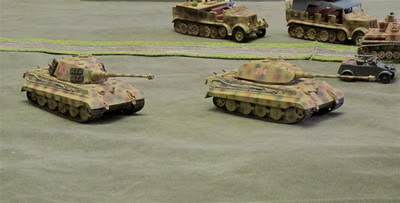 ...and where, as luck would have it, there would be a pair of King Tigers in the way ready to maul them. 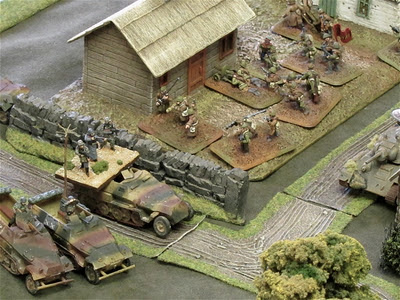 The German Panzergrenadiers crossed the river near the Soviet left flank, and raced along the road in order to force their way through the village. The OT-34 defending that flank was a fearsome prospect for the Germans, who gave it wide berth and singled it out for special attention from the Panzers! 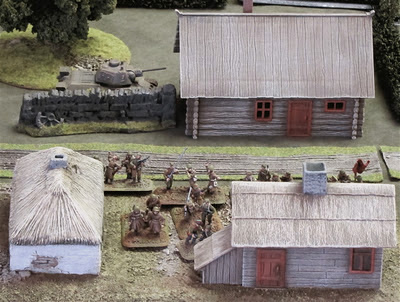 Meanwhile they used a force of Elefants and Stug III's to threaten the Soviet right, which covered a ford across the river.  Sawamoto-san had a largely infantry force here, supported by an SU-122, his only armoured vehicle- and indeed the only decent A/T capability he possessed.  At one point it found itself hit and suppressed by a Stug III.  At this turn of events the Germans swiftly sent their armoured behemoths across the ford into the assault.  Things were looking grim for the Reds! 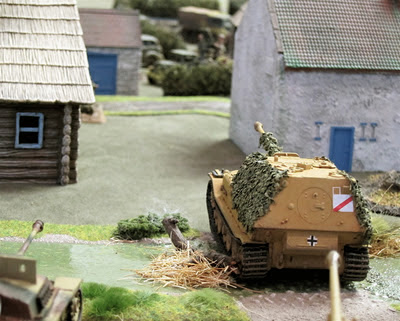 However, the Soviets and their commander were made of stern stuff, and decided to close assault the Elefant directly,  accepting the risk of any limited opportunity fire from the German AFV's.
And it paid off!   On the second assault, they not only destroyed the Ferdinand, but by doing so managed to block the ford.  This not only eliminated the threat of the Germans breaking through the village in the centre, but it allowed the defenders to reinforce the widening fight for the road on the Soviet left flank.  But would it be too late? 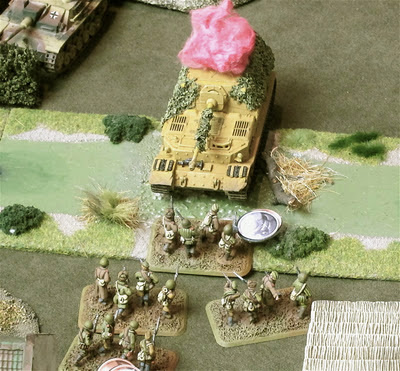 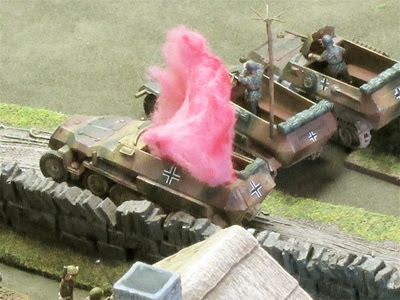 Despite the immediate reinforcements of two T-70's, the fight to prevent the Germans from breaking out along the road next to the village was bitter, with no quarter asked or given!  The OT-34 was knocked out by a Pz-IV, and another German half-track lost to a Soviet A/T platoon. 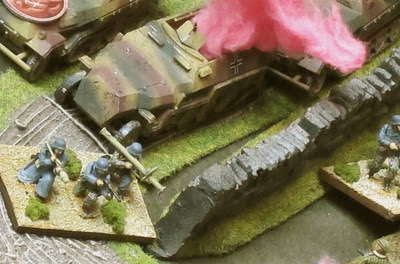 One of the light T-70 tanks was subsequently taken out by a Panzershreck.    Losses were mounting on both sides, with even an assault by an SS unit being shot to pieces by enraged Soviet infantry 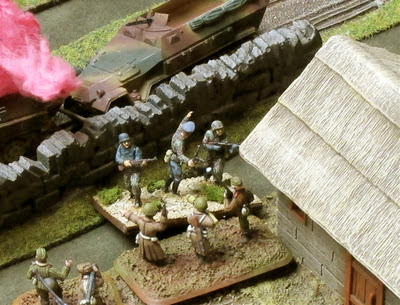 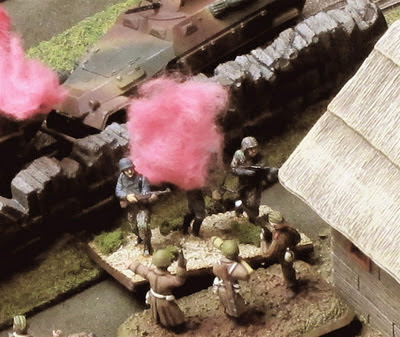 The game was steadily-if slowly- going in the German's way.  As it ended, as it was evident that they would get a good chunk of their forces off the table.  But when we calculated the losses the Germans came ahead by a measly 20 points!   So a German victory, but a costly one.

The Soviets were hampered by a lack of commanders and by not having assigned the right resources to be in the right place at the right time.  Having the towed artillery come in with the armoured reinforcements was also a mistake, as I could never give them the orders needed to go into the village and set up a defence.  All the order rolls were needed just to fend off those King Tigers, which successfully held off the Soviet reinforcing column for the whole game, taking out two T-34/85's and an ISU-152 in the process- for no loss at all.

In BKC-II,  King Tigers, while tough as old nails, are not invincible.  But if you let yourself get caught out in the open by them, expect a lot of your armour to end up as Kitty Nibbles- as was the case historically.
Another thing we learned was the importance moving your overall commander to a position close to the action where he can actually see and influence what is going on, especially if he is commanding the Russians!  That, and the need to dig in defending infantry; next on my terrain agenda are foxholes, emplacements, bunkers and minefields for a proper defence.

The Germans had their problems too; Giovanni didn't need to have used four armoured vehicles to hold the Russian right, and the two Stug III's would have been more usefully employed escorting the half-tracks past the village.  Additionally, Sada had some exceptional bad luck with both command and firing dice, but there was lots of that on the Soviet side too!

In all, a really fun game with triumph and frustration for both sides.   As we packed up. Sada was setting up a Napoleonic naval game for Sunday, so with luck he will be able to post some more pictures of the weekend's events.

It was great to have the chance to get out and chat with like-minded enthusiasts about the hobby.  Thanks again to Takasawa-san for inviting us! We'd love to go back and put on a game next year.