Just in additon of what Robert wrote,

you can find the downloadable version of DBA (Damn Battleships Again) on Phil Barker's official website.

You can also find the very interesting Horse Foot and Guns that covers the period 1700-1914 for wargaming.

Enjoy
Posted by Giovanni at 7:43 PM No comments:

We had a pretty decisive DBR game last night, the Ottoman Turks vs. the Knights of St. John.  More on that later once I finish the battle report.  In the meantime, a teaser.  It was a good-looking game with some very nicely painted miniatures on both sides. 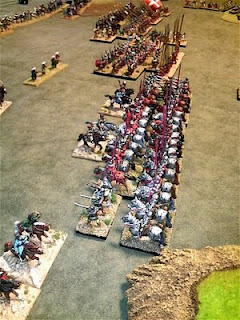 Armour-plated "masters of the battlefield" (ahem...).


Gareth mentioned some interest in doing a WW1 naval game set in the Adriatic using a DBA rule variant.  Something I'm interested in doing, having played a few Russo-Japanese naval wargames using a set that appeared in an old issue of Miniature Wargames.  The rules worked well, and it would be fun to dust my WW1 ships off and give them an outing again.

I dug out what I have here in Japan of my WW1 models.  The balance of the collection- basically the really heavy stuff like dreadnoughts- are still tucked away in a box back in Vancouver somewhere.

Here are the Franco-Italian ships, including the French squadron consisting of the pre-dreadnought Voltaire, cruiser Dupleix and the destroyer Bory at the bottom right. The Italians have the fast battleship Regina Elena and a squadron of beefy armoured cruisers. 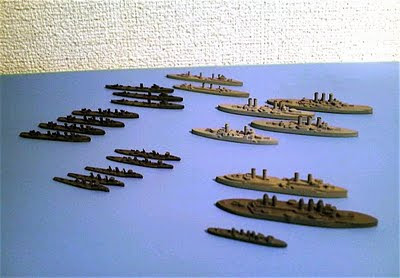 And these are my Austrians. 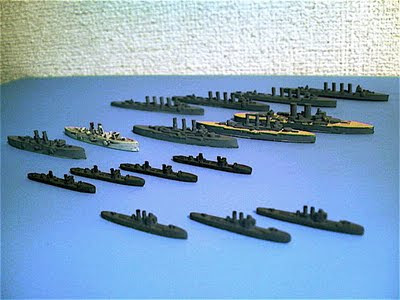 The only Austrian pre-dreadnought I have (at centre-right) is the Radetzky, but honestly I have always had lots of fun just gaming with armoured cruisers and lighter vessels, as well as with their larger brethren.  The Austrians have four modern light cruisers of the Admiral Spaun class that can play havoc with older, smaller ships.

I originally envisioned  a quick campaign, where the Austrians would usually have the advantage of initiative and would sail out under orders to commit GBH to some Italian naval base or other, so the idea is that they would sail pretty much as a unified fleet.  The Italians would be separated into squadrons at various places around the Adriatic, with some French back-up.

Models are 1/2400 Panzerschiffes, along with a few Italian Destroyers from C-in-C.  I also have the Panzershiffe rules, which are okay for smaller engagements,

The Panzerschiffe models are cast from resin and are fairly basic, but they are good, robust models for wargaming purposes.  I have a large fleets of Russo-Japanese War models for both sides as well, which are also from Panzerschiffes.

Giovanni and I enjoyed a game of Wings of War this past Sunday- in fact, it was my first non-solo wargame that I've played for many a year!  And it was well worth the wait. A fun, simple game that is not so simple to master!

The game ended in victory for yours truly- but not through any great tactical skill or acumen on  my part, I assure you.

"Gallant Heroes of the Air" 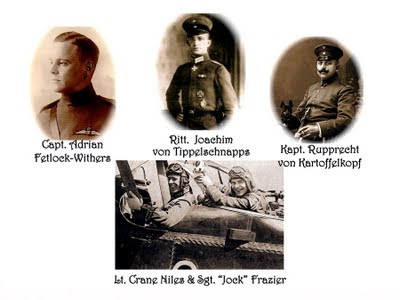 Both Giovanni and myself pranged a kite each through neglecting to start and end an Immelman loop manoeuvre card with a move in a straight line.  That sucked, but at least fate was even-handed.  I also soon realized that while the Tripe and Camel are as agile as hell, particularly when making a right turn, they are not all that swift- especially the Fokker.

So as the mission required that I just had to get off the table edge opposite, I put the pedal to the metal, and just made a bee-line to the horizon.  Neither pretty nor glorious, but it worked!

Here is an old newsreel found deep in the vaults of the British Pathe collection, celebrating the exploit.  While a victory- of sorts- for the RFC, it did cost Capt. Fetlock-Withers a promotion, on account of damaging His Majesty's property through his own recklessness.

(You might want to give some time for the video to load if you have the patience;

I couldn't compress the file as much as I wanted to, as the clarity was already a little iffy).

As the game was really just a training exercise, we dispensed with altitude and other advanced rules.  But already I love Wings of War, and I'm sure I'll be coming back to it.  The use of the cards is cleverly conceived, you have to think ahead fast, and the production design is first-rate.

Ever since I was a kid I've had a long-held interest in WW1, both air, land and sea. Accordingly I've played a number of WW1 air board games over the years; Richthofen's War, Sopwith, and Ace of Aces to name a few.  This one was, along with Sopwith, my favourite so far.  It plays fast, which I think is the essence of an airwar game even if it is at the expense of detail.

And unlike Ancients and Napoleonics, it requires little in the way of painting or preparation.

I've already been mulling over ideas for a campaign- and I've always hankered for a flight of SE-5a's.