I haven't been writing for a while, as you can imagine since I started my new job and I have to get used to the new routine, I didn't have much time to post.

The big change for me, is that I am wearing a suit to go to work. I thought I would hate it but on the contrary I am quite enjoying it.

Obviously I haven't been painting too much and this last 2 weeks where focused on finishing up a few half painted minis and concentrating on reading rather than painting.

I have finished a bunch of 28MM Italians for WW2 that I got from a friend. I wanted to try some new ways of painting miniatures so I gave a try to the miracle dip once again. This time I wasn't too impressed and I had to spend more time than I thought touching up the miniatures.

I started by painting them the traditional way and gave them a dip of stained varnish. This time the highlights I made previously, just disappeared under the coat of varnish so once dried I again, gave the miniatures some highlights. The good thing is that the effect you get from the varnish makes it easy to do highlights that resemble almost blending.

I hope you like my first WW2 effort in 28mm. Oh! By the way in the long run I should be able to use this miniatures with the Bolt Action ruleset that I just received.


As mentioned earlier I also got my copy of Bolt Action. I have just flipped through the pages and looked at some pictures, but it looks really good. It will take me a while to read it but I think it will expand my horizon about WW2 rules. I still remain a great fan of 20mm models for WW2 as they offer a larger variety of models and ranges, 20mm remains the classic wargaming scale. I have a lot of good memories of 1/72 scale models especially the now defunct ESCI.

Although you can see Bolt Action in the back this photo main focus is on how thick the latest issue of Wi is. I got it as an Omiage (souvenir) from a friend that went to Denmark, and was kind enough to get me a copy. It is a great issue that beside all the Flames Of War stuff has loads of good articles covering many periods. Great Dark Ages articles that got me wanting to get the Saga rules.


Also thanks to another friend I got a copy of Black Powder, I was thinking about it since a year ago, and finally after playing a couple of games at the club I decided to get a copy. I also got the supplement Last Argument of Kings, a fantastic eye candy rulebook that covers the 18th century.


Last but not least, a while ago in my trip back to my hometown of Turin a friend at the local club gave me a 17th century musket ball, that he bought at an antiquity fair in the mountains. It is probably a musket ball used by the protestant Vaduois living in the western Alps that had to fend themselves from the French, the Piedmontese and who else was crossing that part of the Alps. This is a real cool little treasure for me that I wanted to share.


That's all for now, tomorrow I am off to learn how to use and ice cream machine, I will be making gelato all day I hope it will be fun!

Report: Battle of the Yellow Sea - a reprise


This was really a tryout of Phil Barker’s ‘Damn Battleships Again’ rules for a fleet action. It was a big game with over 90 ships involved, and we decided to use the optional character rules for senior officers; Russian, 2x Torpedophobes and one Gallant/Mad, Japanese were 2x Chivalrous and one Gallant/mad. We didn’t use the historical OBs, but simply chucked all the Russian Pacific fleet plus the Variag and the Vladivostok cruiser squadron against the whole of the Japanese Combined Fleet.


The game ran pretty well. We had the usual problems of PIP based movement – you never have them when you need them! Much of the fighting took place on the Russian right, where Japanese torpedo boats were pretty much forced by the need to avoid colliding with their own armoured cruisers into making a torpedo attack against the Russian cruisers and battleships. It was fun, felt rather like a nautical Charge of the Light Brigade, and had pretty much the same result. 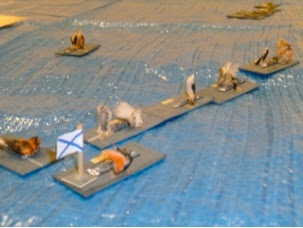 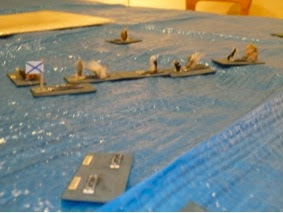 Japanese losses totaled 8 destroyers, and no Russian ships were sunk. Still, supporters of the Jeune École would no doubt take comfort from the fact that two Russian cruisers were crippled by the destroyer attacks in the battle. The final result was a draw. Japanese losses were 8 destroyers (4 bases), plus hits on the Mikasa and the Tokiwa. The Russians lost no ships, but the cruisers Bayan, Variag, Diana and Novik were all crippled, and the Askold, Pallada and Boyarin all took hits along with one destroyer.

We decided the overall result was probably a draw. It was a lot of fun and looked good, and definitely one to try again.


Today was the another exciting day at the West Tokyo Wargamers. Our burgeoning Warhammer tradition continued with a new visiting member and a game of Tomb Kings vs Beastmen.

Also in the afternoon there was a fantastic looking Russo-Japanese naval battle to be seen.

Even though our numbers were small this month, there is no reason to be discouraged. There will be a West Tokyo Wargamers presence next weekend as we mingle with some boardgamers in Funabori!

I didn't plan to post anything today but my Prince August order arrived and last night I finished my African tall grass, so I couldn't say nothing. I wanted to share the sheer excitement of an order arriving and a project finishing with a result over my initial expectations.

So today after cycling to the kindergarden with my little one, I arrived home o find a brown box from Ireland. Exactly a week ago I placed my order and I was expecting it to arrive next week at the earliest, but to my surprise the box arrived. I have ordered some Napoleonic French moulds that will be turned into Bavarians.  The French Grenadiers will become Bavarian Grenadiers, and the polish lancers will be Bavarian Uhlans! I am really excited about those as I see them as the classic war-game toy soldier that you would see in Charles Grant, or Donald Featherstone's books about wargaming.


Last night I also managed to finish my african tall grass and I was amazed by the result, so much that yesterday in a trip to a local DIY store I bought some more aquarium plants. My Darkest Africa project is just started, but instead of rushing buying the figures, I decided I would start making the terrain necessary for the games. Once I will have enough terrain to represent African Congo I will start investing in the miniatures. Having said that I already had some british troops you can see in the photos and I bougth a box of Zulus from Warlord games, in order to wet my palate.


So this is it for this week as a friend will be over from Italy and I won't be able to post anytime soon.