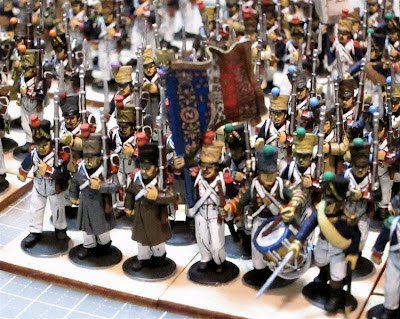 Help has arrived for Johnny Frenchman! as mentioned we decided to pool together and purchase a painted French brigade from Mabuhay Miniature Painting Service in the Philippines.

Fons over at Mabuhay was great to deal with, and within little over a week of placing the order, I had the box in my hot little hands- four, 36-figure French line infantry battalions!  Amazing turn around time, and I am extremely satisfied with our choice.

The miniatures were very well packed, two boxes each carefully placed in a foam-lined cardboard box. 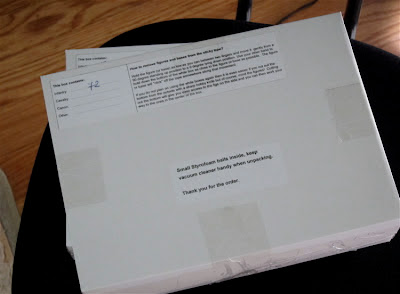 Each miniature was attached by double-sided tape to the floor of the smaller boxes, and the boxes were filled with tiny, very light Styrofoam balls for protection. 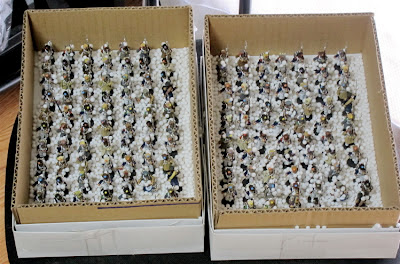 Fortunately, Fons puts a big label on the boxes cautioning that a vacuum cleaner should be on standby, which was a really good idea when I came to open them! 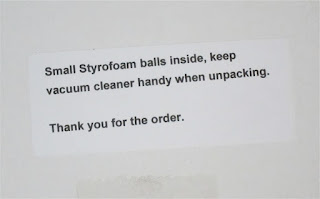 The stuff really does get everywhere.  But what counts is that there were absolutely no damaged figures.

Once the packing was removed,   I just gently twisted each figure off the tape and glued them on the Litko stands I had waiting for them.  I did this one stand at a time, which kept things orderly and myself sane.

Painted using Vallejo paints over a black undercoat, Mabuhay stresses that their figures are painted for the wargames table, and are meant to be viewed at that distance.  Nevertheless, the painting was very creditable for "wargames quality" miniatures, with lines being crisply painted and no slopping over.   Uniforms were painted a nice, dark blue that will go with our existing collections.

The only thing I did was to touch up the highlight the red and yellow pompoms of the elite companies. These colours were a little "lost", having been applied in one coat over black.  I wanted them to stand out a little more, and it was little effort just to go over them again with a stronger hue.  The metalwork on the muskets was a little too  'silvery' for my taste, so I also decided to give them a wash using a mix of matt varnish with a bit of black paint.

But all this was just me being me.  As is, the miniatures would be perfectly okay on the tabletop without the extra bother.
The GBM flags are a bit big for the plastic staffs that come with the Perry figures, so I had to trim them around the poles. 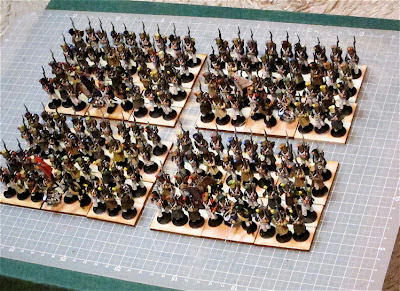 Here is the brigade as it looks so far, flags finished and bases ready for texturing, painting, and flocking.  I'll use PVA and sand.  When dry this will be painted earth and highlighted, followed by gluing on some static grass.  Fun, fun, fun...

I also realized that these fellows will need a brigade commander.  I had some Front Rank figures- a general and aide- which would serve nicely, so today I prepped them for painting.