I've been asked to write an article about something for the club blog. To be honest, I've never written a hobby-related article so this is a first for me. If you don't have the time or energy to read the article you're welcome to skip to the photos at the end. Those brave enough to continue, do so at your own risk.

Well you might be asking yourselves, "What's this Rendezvous with Destiny malarkey?"
"Rendezvous with destiny" is the motto of the Screaming Eagles 101st airborne division as featured in the book and TV series "Band of Brothers", which follows the exploits of Easy Company.

Easy Company, 2nd Battalion of the 506th PIR (Parachute Infantry Regiment) of the 101st Airborne Division, the "Screaming Eagles", is one of the best-known companies in the United States Army.
In its first combat action, Easy captured and put out of action a German battery that was looking down on Utah Beach. The company led the way into Carentan, fought in Holland, held the perimeter at Bastogne, led the counteroffensive in the Battle of the Bulge, fought in the Rhineland campaign, and took Hitler's Eagle's Nest at Berchtesgaden. 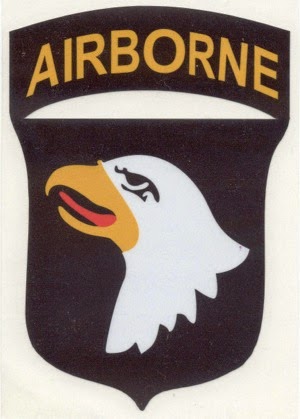 Historically there were three twelve-man rifle squads plus a six-man mortar team to a platoon. Each rifle squad included a machine-gun team that would lay down a base of fire while the rest of the squad would try to outflank the enemy.
In Bolt Action, US platoons are each allowed to take up to three machine-gun teams (basically that's one per squad if you have three squads per platoon), so at least, in that regard, the authors of Bolt Action have taken into account the historical organization of these platoons. I only have two twelve-man squads so I guess my platoon is a small one. I also have a 60 mm mortar team, medic, forward observer and assorted HQ staff. Not enough for 1000 points. I'll have to get something big and nasty to reach the 1000 point mark.

Helmets, uniforms and other tomfoolery

Airborne companies were identified by markings on their helmets. The club, diamond, heart, and spade signified each of the regiments attached to the 101st. Easy Company had the spade mark.
The uniforms had a screaming eagle patch on the left shoulder and an American flag patch on the right shoulder. The 101st didn't have the American flag patch during the Normandy landings, the soldiers received that patch during Operation Market Garden. Why am I ranting on about this? Because I didn't bother putting on the US flag patch and that's my excuse.
I used decals for the helmet markings, screaming eagle patches, rank insignia etc.
I think my miniatures are almost tabletop-ready. They're about 90% done. I just need to finish the basing and tart them up a bit. The miniatures are from Artizan Designs.

If any of the historical information I've given is inaccurate you have my apologies.

I'm not just into Napoleonics!  I have recently been busy cleaning, undercoating, and have just started painting my first 28mm Imperial Japanese for Warlord Games' Bolt Action.

I downloaded an app for my iPad, Battlescribe, which allows me to construct army lists without having to faff about with Excel or with scraps of paper and a calculator! Now, I'm not one to get hung up on points, and I am virulently against min-and-maxing out lists that take no account of historical organization.  But it's good to have some kind of guide for building up a force, especially when starting out.

Using this, I made a list I made around what I have in my collection already, just under 1000 points. I'm sure I will tinker around with the composition later as the collection grows and we get some games in under our belts.  I'm already aware it is lacking in any kind of anti-tank capability, but one step at a time.

Just to have some historical peg to hang my army on, I decided to represent the Aoba Detachment, including infantry from the 5th Regiment, 2nd Division IJA, based in Sendai, who fought (and were decimated) at Guadalcanal, later serving in Singapore and in Burma.  This was also my late Father-in-law's regiment, although the war ended before he could be shipped out as a reinforcement (there was no fuel available at the time, luckily!)

Matt is doing some British/Commonwealth troops from Burma, so that looks like being the first campaign on the agenda.  However, my Tohoku lads are ready to go anywhere, and to fight anyone!

At this point, the list is based on what figures and models I already have.  These are from Warlord Games,  TAG Miniatures (The Assault Group), and Brigade Games.  The tankette I got from Kazu at his new shop in Akihabara.


Of course, we will be needing terrain, and Giovanni already has some very nice jungle pieces he made from aquarium plants.  I've some laser-cut pieces I'm working one, plus this large bunker. 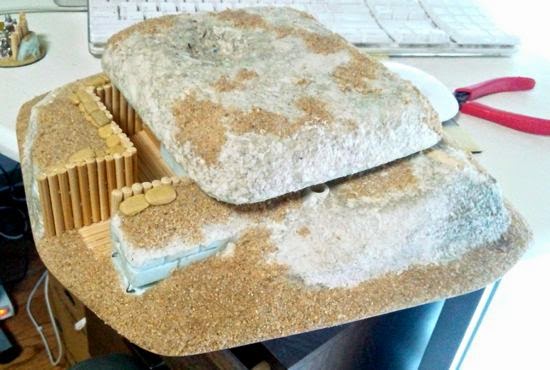 I've also a number of US Marines primed and ready, but seeing as Matt is already working on his British I'll focus on getting the Japanese done first.  I will post more as the project develops- we are hoping for our first game sometime this summer. Hopefully Matt will share some pics of his stuff here at some point.