And a good time was had by all!  Turnout was a little low, as this week was the run up for the "Golden Week" vacation, but there were more than enough of us to set up some games.

A miniatures game using the increasingly popular Blitzkrieg Commander II rules, and some board game action ranging from the 100 years war to an appointment with "Madame le Guillotine"! 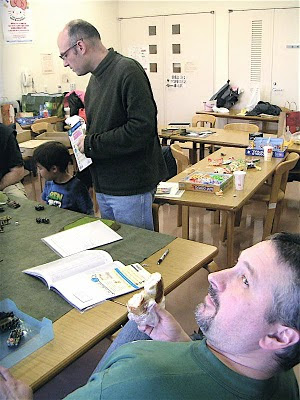 Plenty of time to eat a bagel first, and then go on to repel the English invaders!
The BKC game saw the Soviets against an unholy alliance of the Japanese and Germans!  We are more than willing to play fast and loose with the historical facts when we need to. 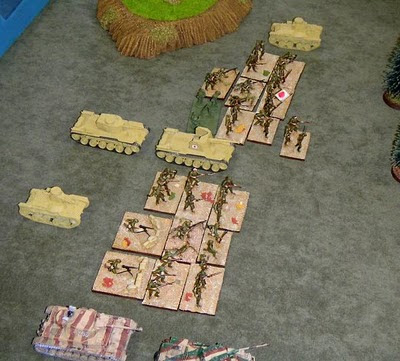 The Japanese contingent. I still need to get those tanks finished, once I get the guts to start on the camouflage. The mortar team also needs to be finished, but are to receive the benefits of Giovanni's capable brushmanship. 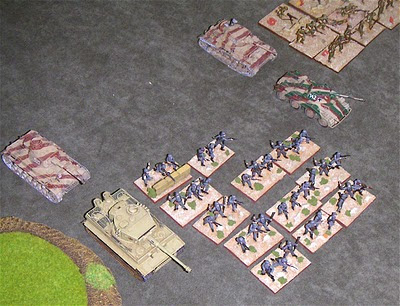 The Germans.  The Tiger was initially a concern to the Soviets, but we needn't have worried! 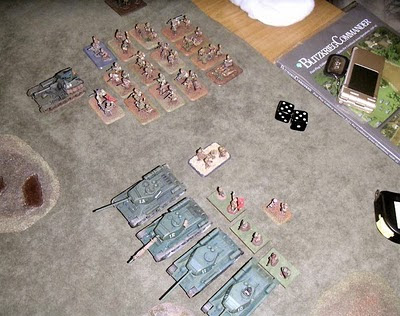 Robert's Soviets.  They were to survive the game virtually intact, save for a broken gun barrel of a T-34, of which the least said the better! 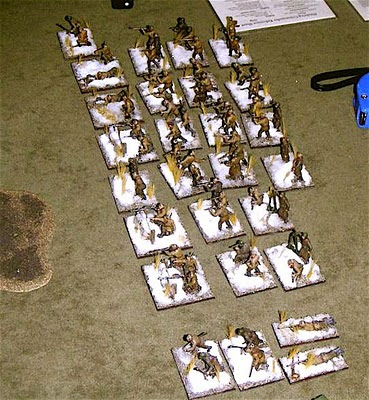 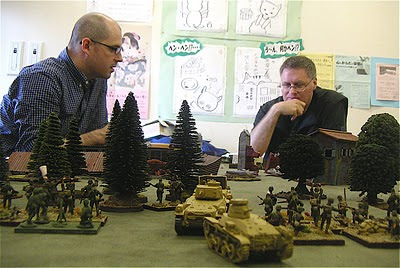 General Danielevsky consults with his Political Officer and STAVKA representative,  Comrade Col. Maxim Lebedovitch, as to how much vodka can be transported in an SU-76 without compromising ammunition requirements.  Meanwhile, the Japanese contingent rolls not-so-inexorably forward.
A little known fact of WWII. A force of Germans were trapped in a pocket in the Crimea in 1944, and decided to flee from the Soviets by advancing eastwards through Soviet Asia and Mongolia to Manchuria, where they hoped to meet up with their Japanese allies. After numerous adventures and close calls, they succeeded on joining up with a Japanese garrison on the Soviet/ Manchukuo border. Both then fell back towards Hailar, trying to shake off a battle-group of pursuing Soviets who are hot on their trail. Borders and cease-fires be damned.

But the German commander Sturmfuhrer Joachim von Braun- a confidant of the Fuhrer and also a brother of Eva Braun, with considerable inside information about the Nazi high command - was wounded and left behind in a shack while on reconnaissance with some of his officers. They were wearing captured Soviet uniforms, as they were trying to infiltrate the Russian lines.

If caught, he is bound to be publicly tried and then shot as a spy (not necessarily in that order). Hence it is imperative for the Axis that he not be taken. as to have him captured by the Soviets would be an unacceptable propaganda blow to the Axis, and a great coup for Stalin.

The Axis forces (Giovanni and Brian) were as determined to rescue him as the Soviets (Robert and Daniel) were to capture him- preferably alive, but neither side was too fussy about that. 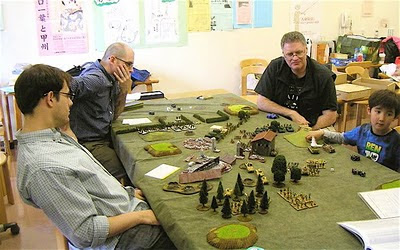 Kibitzing by an observer who clearly displayed a bias for the Axis...  Fortunately, his advice fell on deaf ears!
Brian, the Japanese commander, meanwhile wonders what it would feel like to actually pass a command roll while waiting in vain for the German commander to take matters in hand...
The game was a real hoot. The Germans advanced quickly, but the Japanese were slow to support them (either bloody-mindedness or dreadful command rolls!).

The Germans had some initial success, largely due to the support of a pair of Pz-IV's, a Puma and a Tiger. But the tables turned decisively in the space of two turns, when the Germans had their noses wiped by a battalion of T-34/85's.

This was due to the Soviet commander having learnt from (bitter) experience that it pays to concentrate all fire on one target at a time- and to pray for good command rolls. The Tiger was wrecked after taking 16 hits over two turns, and the Puma and Pz-IV's were taken out over the course of one turn, one Pz-IV being smothered by a whopping 13 hits in one attack. 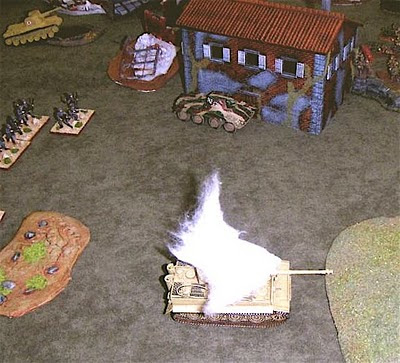 
The Soviet infantry was able to get the unfortunate von Braun back to their start line just as the Japanese started arriving on the scene. He was then taken to hospital and nursed carefully back to health- so that he could then be shot for being the wretched spy that he so clearly was. 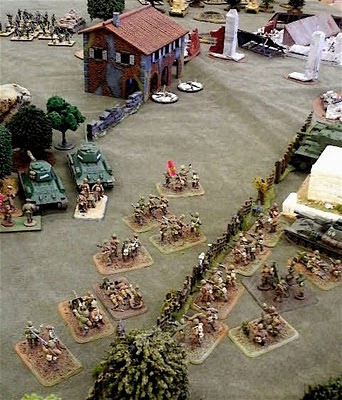 The games are really moving along quickly as we get the hang of the rules. As our forces get bigger and we are able to get more terrain on the table, we are looking forward to more ambitious scenarios.
*****
At the other end of the room, Matt and Gareth were immersed in fighting a 100 Years War board game that saw King John the Good of France elevated to King John the Freakin' Awesome, as the English were sent packing across the Channel. 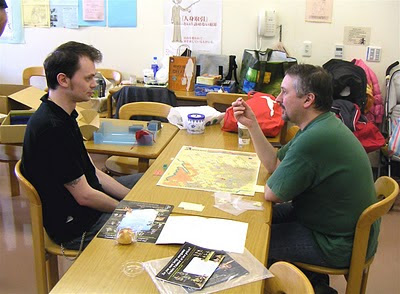 Later, Darren joined them in a a card game of Guillotine, which looked like being a real fun game!

Matt brought some of his Perry Miniatures Napoleonic British.  Very well painted they were, and we look forward to some Napoleonic actions later this summer, if all goes well.

Finally, Darren had to bring his kids to the game, but made sure that there was something in it for them, too!  One can never start too early... 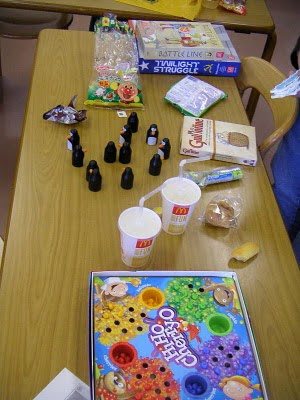 Next games day will be May 30th.

Hi Again,
I have some more news about our next gaming day.
The Blitzkrieg Commander Game will be held by Robert and the DBA Tournament will take place although the number of participant is not confirmed yet.
We will also have visits from the friends of the "Greater Kanto Area War-Gamers Club" and we have a new recruit from Greece, that will bring his newly painted Napoleonics in 28MM for Robert and Matt's pleasure! Matt Also will bring some of his Peninsular war painted 28MM figures. I will bring some paints and brushes and I plan to do some demo Oil Paint Washing on Gareth's galleys. If you guys have photoes of painted miniatures that you could like to post on the blog please let me know I will be happy to post them. 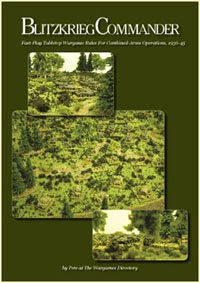 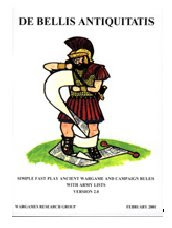 Hello All,
Just to keep everyone updated for the 25th of April we are thinking of running a De Bellis Antiquitatis tournament, and a Blitzkrieg Commander game (TBC).
Anyone is more than welcome and if you have not done it yet, please confirm your participation by mailing at the address under the banner (with the ships) on the right hand side of the screen.
Thank you
Giovanni