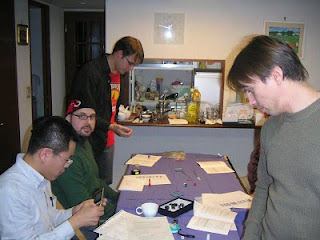 Game preparations, the only one who seems to have realized a photo was taken is Daniel (aka The lucky Admiral) 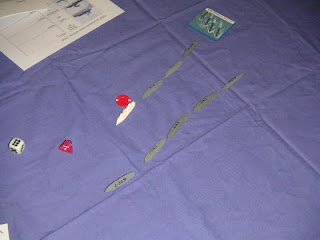 As mentioned above the Lucky General strikes his first hit, on my admiral ship! 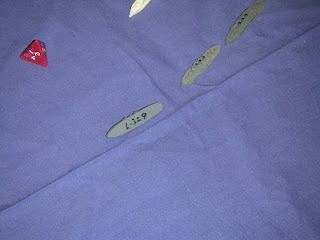 Close up of the sunken ship. 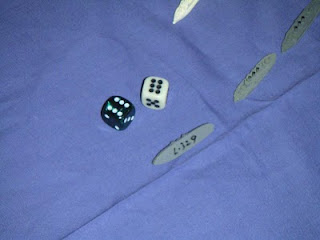 Second big hit double six! he did hit the powder magazines of the ship destroyng it instantly! 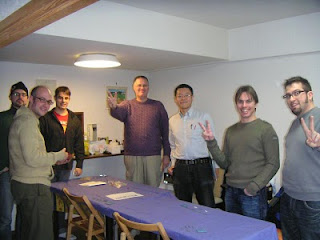 Peace sign while playing wargames!! We had a great day, we are looking forward to the next gaming adventure, Thanks to everyone for coming over.
Posted by Giovanni at 10:31 AM 5 comments:

Battle Report: The Battle of Phung-Chen, 1904 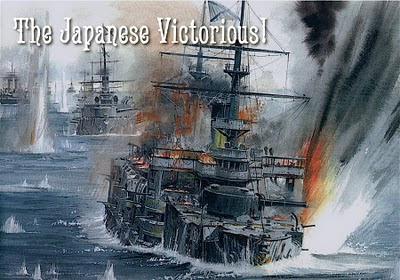 "Samovar ships are missing, Your Excellency!"

(...because the Navy can't.)
We had our first Russo-Japanese naval wargame today, and it ended with the Russian Fleet in tatters, howls of dismay from St. Petersburg, and disaffected Russian sailors plotting revolution and the creation of a Socialist Utopia.  Meanwhile, Japanese officers and men busy themselves deciding which particular cask of fine sake or shochu to imbibe in celebration.

The rules played reasonably quickly once everyone had a few turns experience under their belts (and once everyone could be kept sitting around the table and concentrating on the game without getting too distracted with hobby talk; this was the first time I had run a game for nigh on for 20 years now, and I had forgotten just how much it can be like herding cats at times!).

This was the first time anyone (including myself) had tried the rules, but overall I think they worked quite well, and it certainly had the feel of a fleet action.  We were using a simple set of naval rules for the Russo-Japanese War by Mike Adams that are available freely for downloading here.  These are based on DBA, and are a modification of a similar set of rules that appeared in an old article in Wargames Illustrated.

These are not for single-ship, Hood vs. Bismarck-like  duels.  They were designed for manoeuvring squadrons and fleets rather than concentrating on individual ships, so battleships are just that- battleships, and ships are classified into generic types rather than being given any individual specific characteristics.
The scenario had called for four separate squadrons coming in from converging points of the compass,  but due to the shape of the piece of blue cloth I was using for a playing surface, we ended up having to play using a long- but far too narrow- table.  Given that the gunnery ranges were up to a max of 24", this had ships blazing away at each other by turn two.
To cut a long story short (and saving the Russian command from too much undue embarrassment), the Japanese battleship squadron managed- less by design and more as a result of serendipity, what with the table being too narrow- to end up  bisecting the table and crossing the "T" of both the Russian Pacific squadron coming at them on their port side,  and the armoured cruisers of the Vladivostok squadron heading directly to meet it coming in from the starboard side!  Talk about a target-rich environment.

The game went very much in favour of the Japanese right from the beginning, with the Pacific squadron's flagship- the Petropavlovsk under Makaroff- being blown to fragments, taking it's admiral down with it (-1 to all CP rolls).  Tough cookies, made all that much tougher when the next ship taken out happened to be the Peresviet- the 2inC's ship, imposing a further CP penalty on the entire squadron.  Ouch.
The game effectively came to an end when a shell from the Hatsuse managed to detonate the Czarevitch's magazine.  "Blowed up reeel good!", which meant that the Pacific squadron- having now lost more than 25% of its battleships- was sent scurrying back to Port Arthur.  In doing so, it left the Vladivostok squadron to the tender mercies of the Japanese main battle line in front of it, as well as to Kamimura's force of modern armoured cruisers and obsolete battleships to the rear, following hard on the Russian cruisers' heels.

Banzai! Russian armoured cruiser sandwich as a snack to go with our sake tonight, boys!
The crowning insult was when a 12" shell plunged into the innards of the protected cruiser Bogatyr, which was bringing up the rear of the Vladivostok Squadron.  No more Bogatyr.  Credit for this sinking went to, of all things, the Chin Yen.  This was an obsolete battleship- a war prize taken by the Japanese from the Chinese the previous century- with pitiful guns and woeful speed. Oh, the shame...
The only Japanese losses were a destroyer and the light cruiser Niitaka, which were scouting for the Japanese main battle line and took a pummelling from the Pacific Squadron's guns for their pains.
*******
I think this is a period and a set of rules we will come back to, as it was easy to pick up, doesn't bog down in too much detail when using a lot of ships,  and we were able to reach a conclusion in three hours (it would have been much less if we had been familiar with the rules).

With hindsight the scenario was too ambitious; I should have set up two separate games or made do with fewer ships per command, but towards the end of the game everyone seemed to have gotten the hang of the rules and things were moving pretty smoothly.  But it definitely should have been played on a wider table.  That, or I should have or reduced gun range and movement  accordingly, but to me, that would have been a less attractive option.

One of the good things about the rules was, I felt, the generic treatment of ship classes.  This meant that players unfamiliar with the period and ships didn't have to be frustrated with or worry about the strengths and weaknesses of individual vessels in their fleet.

Again, the focus is on commanding fleets and squadrons; maintaining fleet/squadron integrity,  using small vessels to scout out the enemy or to screen the battle line, and to concentrate on manoeuvring your ships into position where they can deliver the most effective fire.   And all the while trying to minimize the risk of receiving any overwhelming return fire from the enemy fleet.  All this is what admirals and flag officers are supposed to do.
The rules do provide some variation between opposing fleets; there are modifications for training, seaworthiness, and leadership.  The only one we used was the +1 combat factor for Japanese superior fire control.  That proved pretty brutal, and I am glad I didn't penalize the Russians with a minus factor for leadership or inferior coal, as that would have been a real rout.  Next time the Japanese don't get so many ships, or else they have been at sea on blockade duty too long so as their speed is penalized due to fouling of the hulls.
Destroyers were pretty ineffective- true historically too- but I realized that they could be very useful when ships are immobilized.  As they alone get a +2 CF  against stationary targets, they could be very effective at taking out cripples while the main battle fleet engages new targets.  We didn't have so many Dead-in-the-Waters though. Those critical hits that did take place were mostly the dreaded double sixes- exploding magazines!
Some suggested alterations to the rules;
1)  We were a little confused as to how destroyers were meant to be handled.  According to the rules, destroyers are defined as "a collection of small torpedo-armed vessels".  We were using four or five boats to a stand rather than individually basing these very small models, as was the intention of the original rules published in WI.


This worked fine on the tabletop, but does a flotilla count it's CF of 1 as a flotilla, or as each individual boat in the flotilla?  We decided that a flotilla would attack with a CF of 1 per vessel to a max of CF 4, and that each time a destroyer was sent to the bottom- they are considered sunk upon receiving any critical hit- the attack strength would be reduced by a -1 accordingly.  We really didn't have much opportunity to test this out, but we'll give it a try next time.

2)  It was agreed that there should have been some kind of modifier for target size.  Battleships were just having much too much damn fun!

Lighter, faster-moving targets are generally more agile and harder to hit.  So in cases when larger ships are firing at vessels which are of a lower rank in the pecking order, I would propose a -1 modifier for every step difference between vessel category when firing at medium or long range.

So for example, if a battleship is firing on an armoured cruiser at medium range, it would receive a firing modifier of -1 as an AC is one step down from a BB.  If the same battleship was to engage a light cruiser at the same distance,  it would then receive a -2 modifier, and so on.

Note that this wouldn't apply to engagements at short range.  Nor would it apply to secondary batteries engaging light cruisers and torpedo vessels, as these would be quick-firing guns able to range in on a target and reload relatively quickly.
*******
All in all it was a lot of fun, and I'm looking forward to another game some time in the future. This time with minefields!  And I promise to get all the names put on the ship bases!

Do you have any pics, Giovanni?


-Robert
PS- Wouldn't it be great if we could do a game like this on board the Mikasa one day? 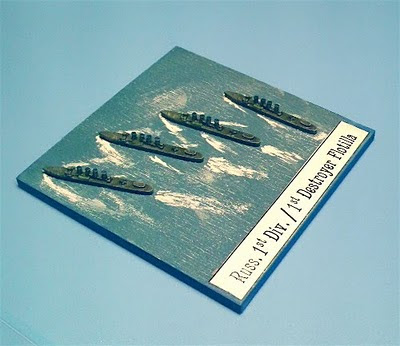 Torpedo boats and destroyers are tiny even in this scale, and are based in groups on 60mm square bases.  Other ships are based individually.  Not all the models will be based as nicely as this one, but I'm working on it.

I've put together a scenario- loosely historically based- for the game on Saturday.  In between trying like a madman to get as many as possible of my ships based and labelled (I don't know how many of you may be familiar with RJ-War ships, so adding names will make things go faster).

Click here to read the scenario.  Four or more players, depending on how many people show up I can change forces accordingly.  I'll post the order of battle soon.  Luckily, the rules require no bookkeeping.  But does anyone have any white golf tees to use as hit markers?

Don't expect the Yamato and salvoes of 18'' shells raining down in buckets here- we're way down the technological ladder in 1904!

Will the Russian Fleet at Port Arthur break out and give Admiral Togo a bloody nose?  Will our Seaborne Samurai stop them?

I'll post details of the scenario in a few days.

Until then, some mood music.  (Sorry to disappoint you if you were expecting Deep Purple...)