Better late than never, but here is the report for our games day held back on January 24th.  We had a great turnout- I counted twenty people at one point- and it was a busy day of gaming, with boardgames, another Napoleonic game using Black Powder, and a very popular D&D game.

Unfortunately, the room we had this time had large side windows where the winter sun was shining directly in.  This, coupled with the fact that we were all busy gaming, meant that the pictures were not as good as we would have hoped, and that there weren't that many of them from which to choose the best shots from.

Still, there were enough so that I hope that we can convey the chaos and fun of the day! 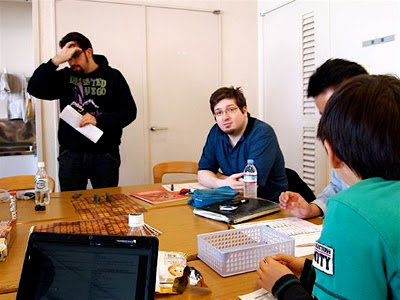 Giovanni, wondering how the hell he let anybody talk him into being DM... 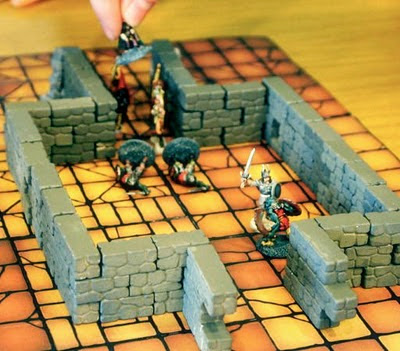 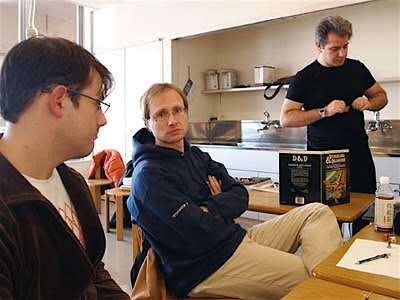 Marco (standing on the right) built the masters and cast up the dungeon walls used in the D&D game. 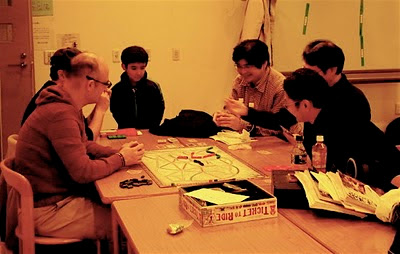 We were very pleased to have as our guests Takeo, Sada, and other members of a gaming club from Chiba (on the other side of Tokyo).  They are an active group of Japanese gaming enthusiasts who play the WRG Renaissance rules by George Gush, as well as Napoleonic Naval games in 1/1200 using the Warhammer Historicals Trafalgar rules.

They are certainly a talented group of painters, and evidently put on some stunning games, as you can see here from a photo of an Italian Wars game.  You can see more great photos on their English blog.

Very friendly people, and it was great to find a Japanese group with whom we could share a mutual enthusiasm for the hobby. Takeo and Sada also bought some of their models.  The Napoleonic ships- from Langton Miniatures- were amazing works of art.  Both Achilleas and myself are interested in age of sail games, so this may be on the agenda some time in the future.  We are all looking forward to seeing them here again. 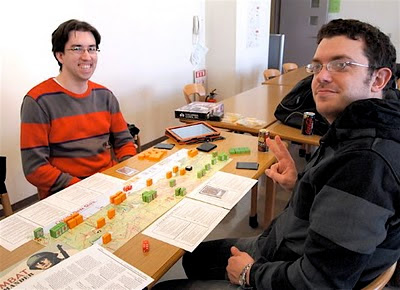 David brought along a number of boardgames, including this one by Columbia Games on the Crusades. 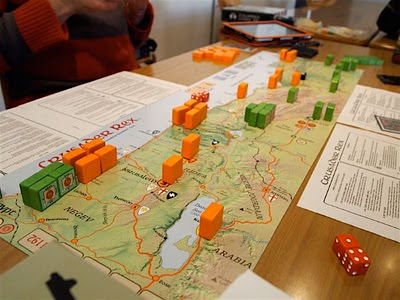 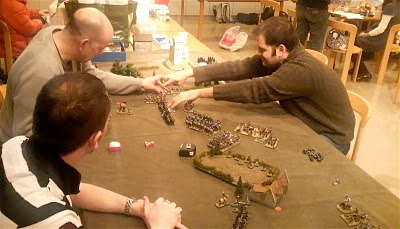 Pete and Achilleas deep in admiration of each other's latest in finger nail art, while Matt looks jealously on. 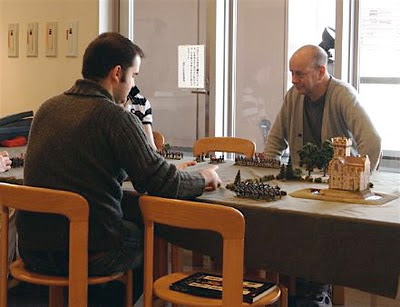 This was Pete's first Napoleonics game for some thirty-odd years, and he seemed to enjoy himself!  Hopefully we can twist his rubber arm and get him to start on some Perry plastics.  This was game #4 using the Black Powder rules by Warlord Games, and so far they have all been very enjoyable.
Here is the French army, prior to receiving yet another spanking by the Brits and Brunswickers.  While our collections are growing, The French still lack enough infantry to mount a proper attack.  Not much we can do about our shitty dice rolling, though. 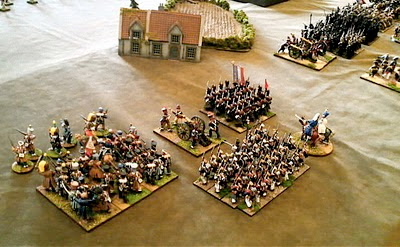 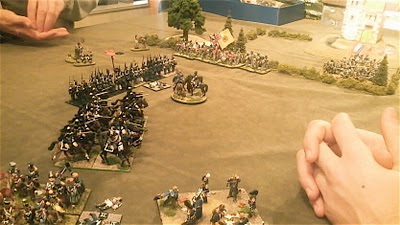 Achilleas' hands clasped in fervent prayer, but "He" clearly wasn't listening to any French entreaties that day. En avant!  General Bouillon-Cantinat orders a French attack on the Brunswickers.  The good general and the gun are my models, the French are from Achilleas' collection, and Matt painted the Black Brunswickers.   Peter made the building and field. 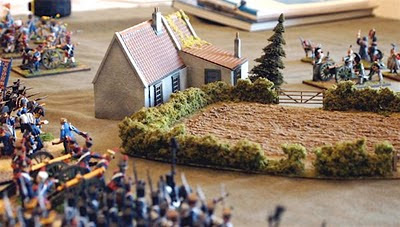 Another view of Pete's farmhouse and enclosed field.  These were garrisoned by Matt's 45th Foot and by skirmishers of the 60th Rifles, who between them held the position against all comers for the duration of the game. 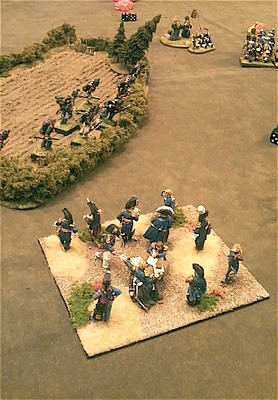 The French high command dithering, panicking, and generally just busy placing the blame wherever it will stick.  Achilleas made this great command stand using Perry miniatures.

Idiot that I so often am, I forgot to bring the usual grass mat we use for our Napoleonic games.  Fortunately Giovanni saved the day by bringing the green cloth we usually use for our WW2 games, but it does play havoc with the colour balance on the digital cameras sometimes.

The French plan hinged on seizing the farmhouse early in the game, but disastrous command rolls saw the Allies get there first, where they proceeded to shoot down the attackers in their ranks as the French attempted to storm the position. 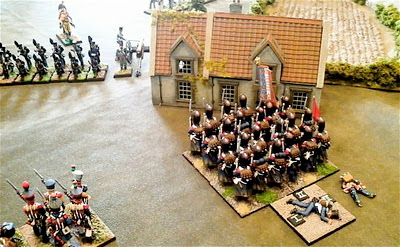 Another attack, this time by French converged grenadiers, was swiftly- and bloodily- repulsed. 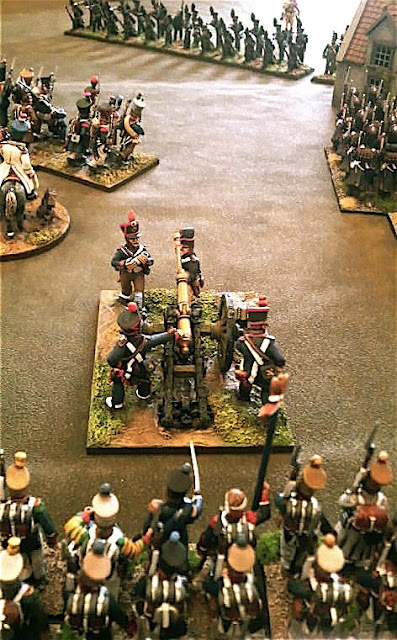 The French threw in a total of three infantry units against the position, but all to no avail.  The British, supported by a field gun and the Brunswick Leib-battalion were more than capable of hurling an enraged Johnny Crapaud back to his start line. 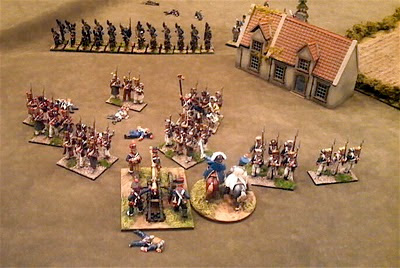 In the centre and right, the French had a bit more success, driving off the 74th Foot again- (hardy a challenge- in fact routing the 74th is becoming a tradition). 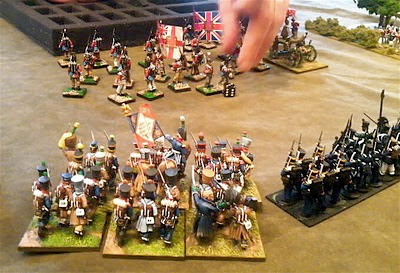 My 28e legere were seen off early in the game on the left flank, so were reincarnated so they could replace one of Achilleas' unfinished units in the centre.  They did much better under General Tallon's dice rolling!

However, better just wasn't good enough.  The French objective was to seize the two settlements one each flank of the table.   Time was not on the French side, as by early evening, the British firmly held the farmhouse on the French left, and Achilleas' attack to take the chateau on the French right was ultimately doomed by a vigorous counterattack by the 88th foot (which is also becoming something of a club tradition, alas...).

Achilleas took on the 88th with his newly-painted 46e Regt de ligne, chomping at the bit to get stuck into les rosbifs and to make its combat debut... 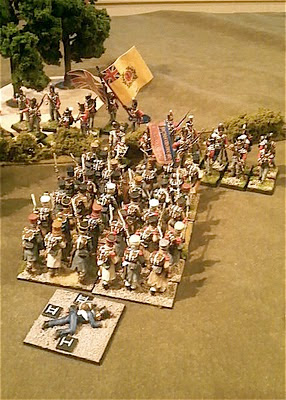 ...only to find itself- as is so often the case with newly painted units on the wargaming table- unceremoniously routed after a few rounds of close combat.  C'est dommage... 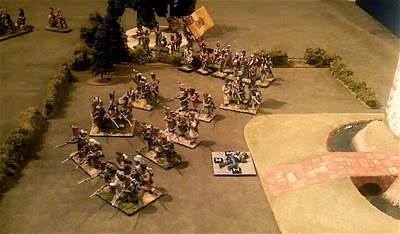 It didn't help that in the absence of sufficient command stands for the British, they had to press a Russian priest into service.  Clearly the Almighty was biased. 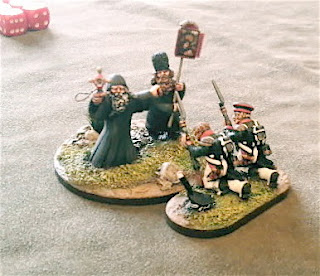 So another French defeat- that's three out of four games for the Allies.  Next time will be different, I promise!  As it turns out, after the game we became aware of few omissions and misunderstandings we had been making with the rules, so the next game should have quite a different flavour to it.

"Well, we had a nice laugh when we played Basic D&D after 20 years, and I have to admit that I was a bit nervous about running an adventure after such a long time. Consider as well that English is not my mother tongue and you can imagine how I was feeling.
Having said that, once you start and get in the mood, it goes pretty smooth, and I think all the players were satisfied.
In this session we managed to use some wall section that Marco has been working on for a while, he made some masters in wood of the blocks and then made a mold so he can make as many as we need for future games. Together with the miniatures, they turned out to be really nice and realistic.

So our brave heroes were all travelling, and decided to stop at the village of Stallanford where the following day the King Festival was to have taken place.  As the legend goes, there was a courageous king that fought with wild and blood thirsty beast-men  and defeated them a 1000 years before, so to commemorate such an event every year since then in the village the King's Festival is celebrated. 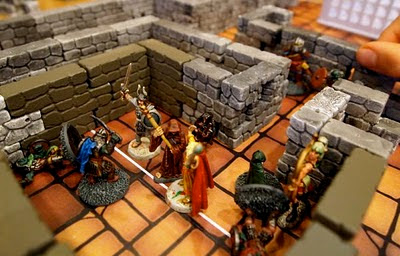 Unfortunately for the village, while our heroes where resting at the local tavern (omnipresent in fantasy games) the village was attacked by some Orc raiders that manage to kidnap the local Cleric. The villagers are seeking revenge, so our group- a Cleric, Fighter, Halfling, Thief, Magic User and Elven beauty- set out to beat the crap out of the orcs.

The Dungeon crawling went well in fact.  We had two RPG veterans that really knew what they where doing, and this helped in getting a good outcome from the adventure.
They managed to defeat several orcs, a giant ferret, a bugbear (scary creatures!) and finally after killing the orc chief to liberate the Cleric. Meanwhile there was a tremor in the land and the brave adventurers got stuck in the dungeon, but they managed to find access to a lower level of the subterranean complex.

Next session on February 27th,  they will challenge a lower, darker, damper level to find out the evil crawling underneath!"*

-Giovanni
*So the next adventure will be set in Roppongi, then?
-Robert
Posted by Robert at 1:15 PM 10 comments:

On January 30th, I took a trip out to the Tokyo suburbs, to the Nerima Miniature Gaming Club. One of their members had invited me to come after paying a similar visit to the West Tokyo Wargamers group.
The space was within comfortable walking distance of the station, and included many tasty places to grab some food along the way. The actual gaming room was perfect, with space for 4 very big tables. They are a very organized and timely group, having a theme of the day and running games from 1pm - 9pm. While I was there I saw 2 games of Warhammer fantasy, and a game of Battlefleet Gothic (なつかしい～～～）.
I also ran 3 games of Dungeon Quest! (a great Games Workshop classic). It was great to be among Japanese gamers, and to be in a group in which the primary spoken language was Japanese. Don't be afraid if your Japanese is not very good, between English, Japanese and all the gamer words that exist in both, you'll be fine. Also, many people in the group do speak English very well. I learned that among these pioneer Japanese gamers, being able to understand English is a precious survival skill considering the amount of material available only in English.
The quality of gaming, painting, and terrain was great, and the atmosphere of all the people was warm, welcoming and friendly at all times. Really a fun time and I suggest everyone to check out their website and stop by if you have the chance.
-Brian
Posted by Giovanni at 10:08 PM 2 comments: