Great news and a bit of disappointment

Let's start with the good news. Brian has gone to the Shizuoka Hobby Show sponsored by Tamiya Models, and has managed to set up a small display of a WW2 game. Hopefully this will help us to get some exposure and recruit new players. Thank you Brian for your effort!


And now the disappointment! Today I received the first of 3 boxes of terrain that I purchased for the club.  The purchase consists of 5 boxes of pre-painted river sections from Gale Force 9 (Flames of War)
On the web te pieces looked awesome and reasonably priced, so I went for it and bought enough for 2-3 gaming tables, so we could all benefit from it.


Then I open up the boxes and I see that all the pieces are made of some sort of heavy soft plastic, great I say to myself, I take them off the PVC bags they where in and Horror of Horrors they had had a sort of chemical reaction and the paint sort of melted and sticked the pieces to the bags! Taking them off the bags some awful marks would remain on the river sections. You could only see those in backlight but they are still disturbing. I tried to wash them in warm water with soap but it didn't work! 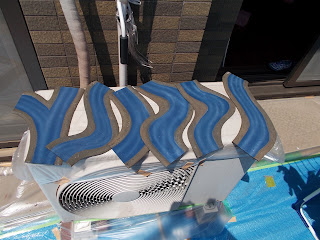 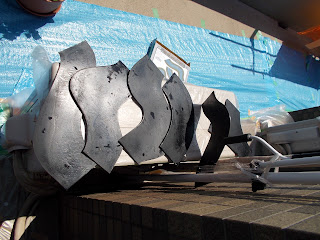 I already sent an e mail to the manufacturer, sO I am trying to see if we can get an exchange, otherwise we might have to repaint them, which in itself could be a good idea since blue rivers do not exixt, perhaps green or muddy brown!

If anybody would like to take up the job of repainting them, please let me know I will pass on the pieces.

Hi Guys,
I got hold of a fantastic set of Knights Templar from Fire Forge Games a new Italian miniature manufacturer.

I have 12 knights and I would love to share them at the next games day.

We could have a little painting competition or perhaps we could all paint one and have a skirmish game.

Some Napoleonics picutres from the 4th of May game

I managed to grab some pictures of the event from Brian (thank you!) they were taken with a phone, so they are not as clear as  those taken from a camera, but I think you will get the idea.

Hopefully Robert will post a battle report of the napoleonic game that was played on his blog.

The turnout was good, we had about 10 people and it looks like we are always reaching a good number of participants now that the club is 3 years old. This time many people due to the Golden Week break and work (poor guys!) couldn't make it. Next month we won't be able to run the games day as all of the rooms were taken! (Damn knitting/flower arrangement club!) So guys you will have to wait a little longer.

Anyway the day started slowly at around 10.30AM. Me and David played a game of Advanced Squad Leader, great game but you need to have a good brain for that, as a matter of fact my americans trying to prevent some Germans to occupy a strategic point on the map, were wiped away with precise bursts of MP40 before the end of the 4th turn!
﻿ ﻿ We followed up with a massive 5 people game of Shogun (Aka Samurai swords/Ikusa) a fantastic game set in feudal japan where you control 3 powerful armies and your mission is to become the overall ruler of the archipelago, THE SHOGUN! In the end David, our expert Stratego managed to win the game, and thank God he did because I think it took us 3-4 hours to finish it. It was great fun as usual and I am looking forward to play again.


All in all it has been a great day of fun, we closed the session with a very salty Ramen (noodles) and extra garlic loaded fried dumplings! What a great way to close the day.

Soon hopefully I will have more pictures especially of the napoleonic game that thanks to Pete great terrains and beautifully painted figures from the other members was a real treat for the eyes.

We had a fantastic event on Friday the 4th during Golden Week, we had about 10 participants with 2 new faces showing up, Thanks for coming!

Robert, Pete, Sada and Matt had a fantastic looking game of  Napoleonics, as it is the fashion at the moment. Great looking miniatures, great looking terrain and many smiling faces. Soon some pictures isn't it Rob?

I was lucky enough to play an Advanced Squad Leader game that I lost for the second time, although I think I am getting closer and closer to understand the game itself. Winning it is another story ahaha. Congratulations David for stopping the american attack on the French village.

In the afternoon we also played a game of Shogun, 5 players and a lot of fun. This game is very simple but quite lengthy, and we went on for about 3-4 hours, but finally David freed us from teh pain fo gaming by winning the game and becoming the Shogun of Japan. I guess he was the only one to completely follow the game and probably the only one who really knew what was going on, but never the less, it was a great game.

As written in the events page, for June we won't have a games day since I couldn't book the room, which was taken from us by the knitting club! darn!

Anyway if anyone has a room available it will be great to enjoy a game in June.

Hopefully Brian and Robert will send us some photos so you will be able to see what happened.

As usual sorry about the spelling mistakes and keep gaming, painting and having fun.