Hi ALL<
I hope you and your dear ones are fine.
For obvious reasons  we have to cancel tomorrow's games day.  We were called by the city hall saying that all activities have been stopped.
Next games day will be on April the 24th.
Take care
Giovanni
Posted by Giovanni at 1:04 PM 7 comments:

Hello everyone!
This is Brian, back for another edition of "Brian's Field Trip".

Today I will be introducing you to the Tokyo Figure Society 東京 フィギュア ソサエティ.  This is a fantastic group for anyone who loves to talk about painting and modeling (mostly) historical figures in a casual, friendly, and supportive environment. They meet in Akihabara, first at a cozy cafe, and then they move on to an izakaya for drinks and good food. The quality of the painters and modelers/sculptures there is world class.  Most of the people there also have some past history with wargaming and the West Tokyo Wargamers were lucky enough to have one of their members come by our meeting in Seiseki-sakuragaoka for a visit!
Japanese is the primary language of communication, but there are members who speak English.  If you fancy yourself more of a painter then a player then please get yourself involved with the Tokyo Figure Society!
http://silver.ap.teacup.com/tokyofigsociety/
(If you need any information, on this or any other of "Brian's Field Trips" please feel free to email West Tokyo wargamers for details :-)
I will certainly be going back to their meetings (on the last Saturday of every month) whenever I get the chance.
Also the Tokyo Figure Society has a table in the "groups" section of the Shizuoka Hobby Show!   This year I will be making my first trip to the show, and I will see the exhibits, and hang out with everyone afterward. I am really excited! (It is the weekend after Golden Week, for those of you in Japan).
http://www.hobby-shizuoka.com/
Until next time,
-Brian

Another great turnout!  We had more than twenty people show up to roll dice, have a chat, and to have fun. It was really rewarding to meet a lot of new people and play some cool games.
Games played were:
And if that wasn’t enough we closed the day by playing Space Hulk.
Here are some photos.

First, Takeo and Sada's 15mm ancient game, as the Republic attempts to tame Antiochus.  Some very nicely painted 15mm miniatures, with the Seleucid elephants and chariots in particular drawing a lot of admiring comments. 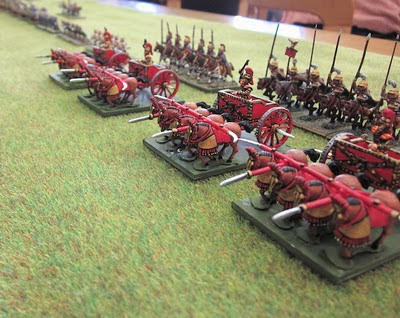 Who would want to be on the receiving end of one of these? 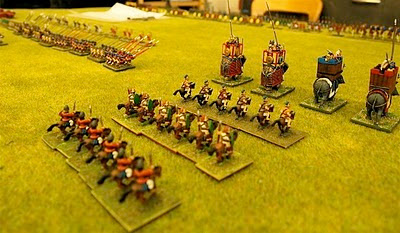 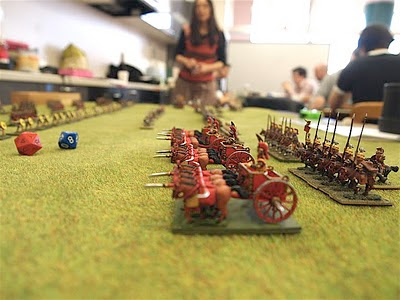 The warriors in serried ranks assembled. 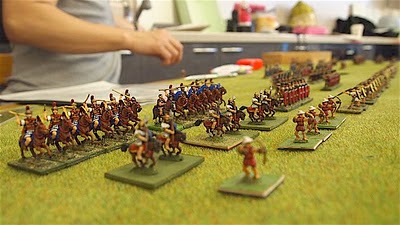 Republican Romans ready to spill blood- preferably Seleucid- for the Glory of Rome.

You can find more pictures and a write-up on Takeo's blog here.  Interestingly, they were using the old Legion rules, published by Fantasy Games Unlimited in 1976.  I even have a copy of that set somewhere back in Vancouver.  "Old School" indeed!

The Blood Bowl game.  I wonder what a GW Fantasy half-time show would look like?  The mind boggles... 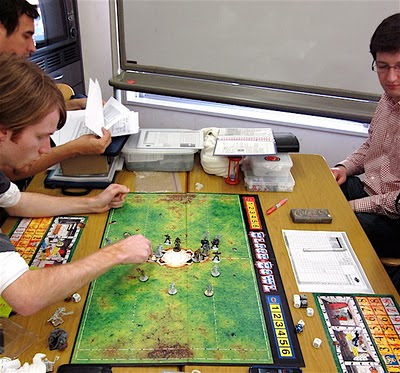 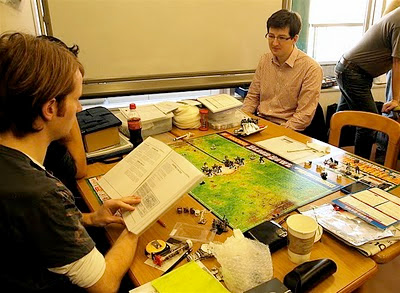 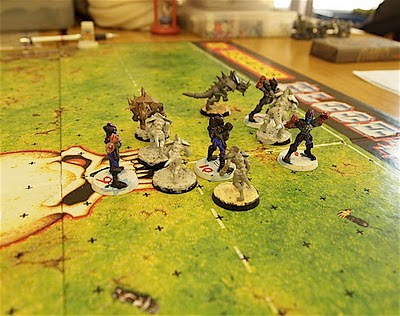 David and Co. playing a game of Combat Commander. 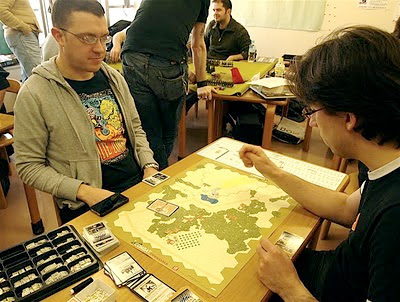 Peter, Matt, Achilleas and I had another game of Napoleonics using Black Powder.  It looked fantastic, and we really enjoy the rules.  We have always been able to play games to a definite conclusion in an afternoon, so they are perfect for club play. 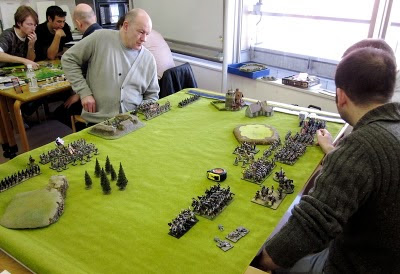 As the French win first initiative, Peter rummages through his pocket for anything heavy with sharp edges that he can hurl at me. 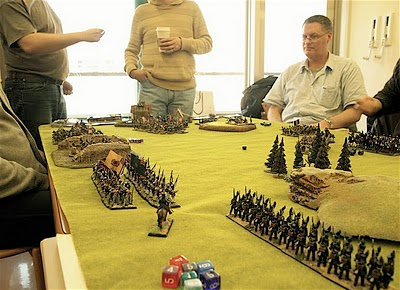 Me, musing on the fate awaiting me in Paris should the French lose yet another engagement.  Fortunately, this time the French came out on top. 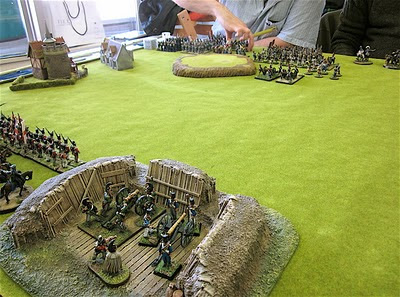 The allied defences including this strong redoubt, along with the dreaded Russian Horse Artillery. 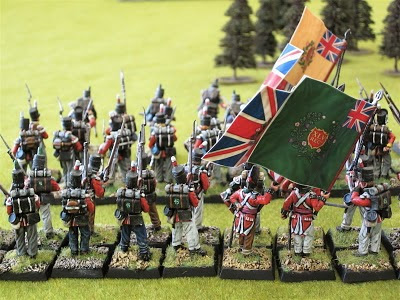 The Thin Red Line.  It was to get much thinner by the time the day ended.  Memo to Matt: how about touching up the edges of those flags? 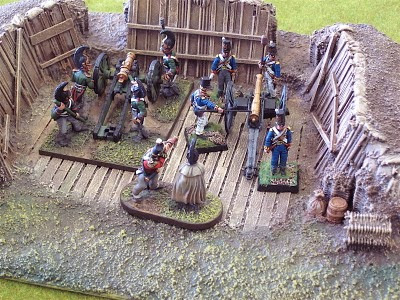 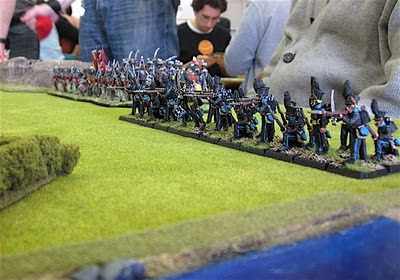 The gallant Brunswickers.  These doughty warriors put up a brave fight when all around them collapsed.

Now, over to Giovanni...
-Robert

What an awesome day! I really enjoyed myself.  Even though we were in the smaller “Workshop Room” we managed to find a (cramped!) place for everyone. 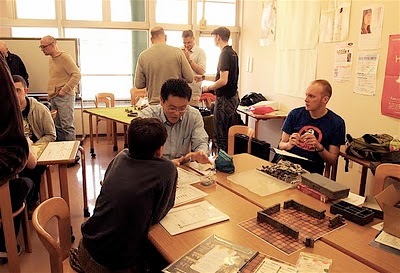 Here I will resume in a few words our D&D adventure that I was running for about 8 players.  The group managed to save the Cleric Alaric, who was imprisoned by an evil clan of Orcs that had their butt kicked by the group. 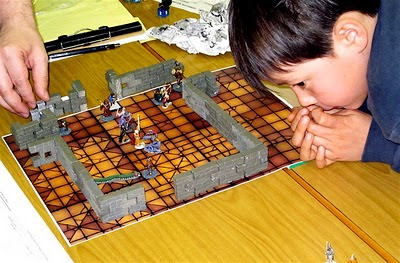 As they were about to leave the dungeon, Alaric started to speak about feeling deeper evil; at that  very moment they found a secret passage in a wall that led down to a deeper, damper darker part of the dungeon. Without fear- but with a good dose of care- they started exploring the first room. 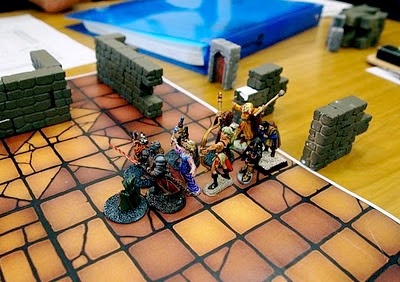 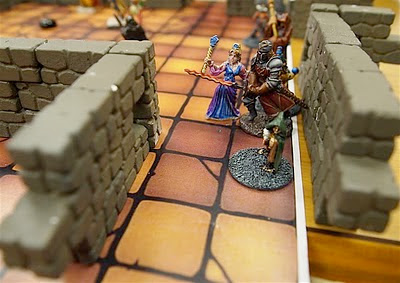 There they found themselves suddenly under attack by some red poisonous centipedes led by a Bugbear that they managed to defeat.  This was thanks to the dwarf and Fighter, who proved themselves invaluable "shock absorbers" for the group.  Unfortunately the dwarf soon fell into the underground hole the centipedes had come up from. 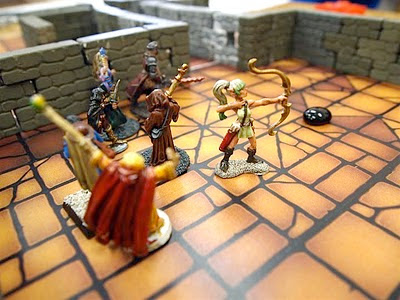 The courageous Gnome went into the hole just in time to see a pair of dwarvish feet being dragged down by what was revealed to be a third red poisonous centipede. 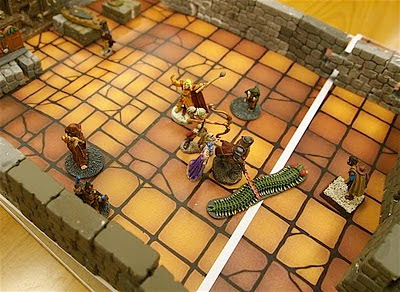 This last centipede met its end when, in the excitement of seizing his prey, it crawled out of its hole and was promptly dispatched by the Fighter with a mighty slice from his sword.

A busy day for us all!  Thanks to Darren, Brian and Ayu for many of the better photos!


I wanted to announce before it is too late that I managed to book rooms for March and April.  The March game will be on the 13th in the Dai Ni Gakushitsu. which is a larger room than usual.
This time we will start in the morning from about 10:30. The room on the 8th floor is fairly  large so that if you have any plans to play large games you are welcome. Please write in the comments section below, or mail me to book your space.
The game on the 24th of April will be held in the Workshop room on the 7th floor. That is the usual kitchen room, so there might be an issue with space, if you let me know in advance what you plan to play, it would be really appreciated.  We will be able to set up  only four wargaming tables and a smaller one for boardgames so I would suggest you contact me to avoid disappointment.
Please let me know what your gaming plans are for these days.
Thank you,
Giovanni
Posted by Giovanni at 4:44 PM No comments: