Tomorrow is the grand day (do you say that in English?) of our first event.
To be honest I am really excited about it, I do not feel it is a goal but the start of something bigger to put effort in, and enjoy in the company of fellow gamers.
The great thing about this Club, and allow me to call it that way because it is becoming pretty much like a proper CLUB, is that thanks to e mails and keeping in touch with other players we are growing in number! Yes we are.
Last night I checked through my list of contacts and sent a few e mails to people I played with a long time ago that I thought they might have been interested in joining us. Their response was very positive so we can now count a total of 11 active members including me! Isn’t that great? Ideally there would be a couple more players that seemed a little bit unsure, or perhaps they live too far away.
We also have received an offer for some sponsorship and thanks to our courageous only Japanese member we might find some more Japanese locals interested in our activities.
I think that is absolutely fantastic and looks like the future for our club is bright. With the time going on we will have to face that not all of us are stable in Japan and might have to leave so we will have up and downs as far as participants goes.
My intention is though to keep recruiting new people and helping with spreading the hobby in Tokyo to start with, later we can expand to all the islands of the archipelago.
As for the gaming direction of the club we are opened to any game really but in order to create homogeneity I would like to focus on World War 2 and De Bellis Renationis as main themes for the club supported by other games according to the tastes of the single members. The reason for choosing these 2 games in particular is that WW2 in 20mm scale (1/72 or 1/76) is easily purchased in Japan as it is one of the biggest plastic model producer in the world, for the infantry you can easily find plastic toy soldiers made by a wide range of manufacturers. If you want to go for Germans you just have to choose from hundreds of companies and soldiers. Also as a period it is easily understood by many and it is easy enough to jump in and start an army. As for other less popular periods you can find it hard to get into and finding the figures is sometimes hard.

The other system that I am keen to promote is DBR that being similar to DBA is set in a period of time that goes from 1500 to 1700 and covers about 200 armies from all the continents. Of course you can match period and countries but if you want to just enjoy a game of African tribes against Samurai you can, so it makes it easy to play and easy to organize a tournament. Also the fact that DBA a smaller version of the above system is very popular and a lot of members have at least one army, it would be the start for us to organize a competition of some sort. I personally am not very keen on competitions because I get my bottom kicked on a regular basis, but I know that there are some players that would enjoy some sort of tournament. Speaking of which, we might get something to be used as a prize from a sponsor which is Fernando Enterprises from Sri Lanka. They are a miniature painting business and have a fantastic website and their fees are very reasonable and the quality of the painting is really good.

So for the members that are not much into painting, they could have armies painted for a fair price. That is all for now, I am excited to meet you on the day, Also since a lot of people have been asking for Sundays, from next month I will most likely move the game on that day.
Posted by Giovanni at 11:48 AM No comments:

WOW! only five days to go before the first public event of the WTW! As mentioned in the previous posts we will have 2 main participation games and 2 boardgames going on.

In no particular order the first game will be a renaissance Naval Game sponsored by Gareth who at the moment is on fire about the naval warfare during the afore mentioned period. He did send me some shots about the work in progress and the ships are looking NIIIICE!! It will be a Christian VS Muslim battle at sea using a very old set of rules published by Wargame Research Group. As he mentioned it could turn into a fast bloody game! 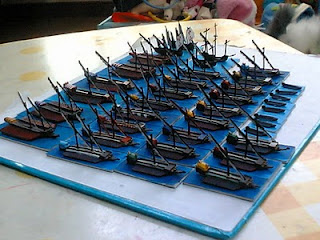 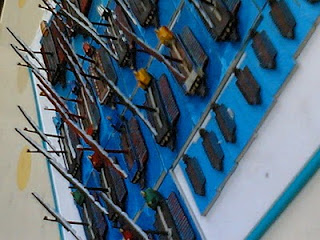 The second game will be a WW2 battle,set at the end of the conflict,between Russia (USSR) and Japan in Manchuria.
Robert will be the organizer and the game will feature a massive piece of terrain! 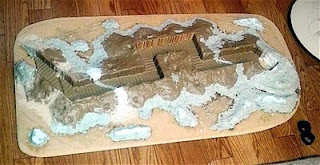 Robert Russians massed in the renches! These are metal 20MM miniatures, same scale as 1/72 or 1/76. 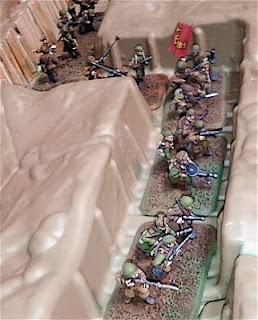 The infantry for the Imperial Japanese Army will come from me, I am basing them at the moment, they are plastic old Esci figures.
I did not have enough stroops, so Robert in order to beef up this understreght infantry went on getting some tankettes, a cannon and a mortar. 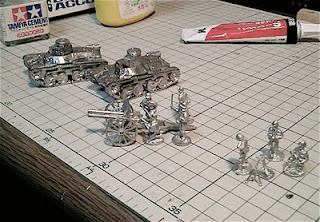 I am looking forward to see the games in action and I am happy to invite anyone who wants to participate to the games.
As for theplace of the event please check the previous post or contact me at the mail address on the right handside of the page under the picture of the battleship.

Posted by Giovanni at 1:26 PM No comments: 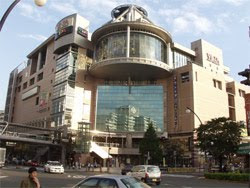 I am extremely pleased and deeply emotionally touched to announce the first event of the West Tokyo Wargamers (WTW) out side of my apartment on the 27th of February at the community centre in Seiseki Sakura Gaoka.
The need to find a new space was dictated by the fact that our number has grown from 3 to 9 people! A fact that pleases me enormously and is the proof that thanks to the internet and the love for gaming, a wargaming club can be organized in Japan as well.
Of course it won’t be the same as a club in the west, especially the Anglo-Saxon countries where it is possible to rent a place and having gaming tables ready all the time, but it is our creation and comes from the shared interest in gaming and the will of spending time together.
The meeting point is the community centre VITA COMMUNE (wrong spelling of Italian) on the left hand side of the west exit of Seiseki Sakura Gaoka station on the Keio line. The official address is
VITA COMMUNE
Tama Shi Seki Do 4-72
Tel. 042-374-9711
7F Workshop ROOM
You will need to get on the 7th floor where you will find a huge hall with chairs and tables, I will probably waiting for you, if you do not see anyone you can ask in the nearby office where the Workshop Room is, this time we will have to toll ourselves 500 Yen so the money will be the first thing I might ask (venal bastard innit?)
For this event we have in plan 2 participation games so far:
Robert’s Blitzkrieg commander Russians VS Imperial Japanese Army
Gareth’s renaissance naval wargame of Spanish Imperial VS Ottoman Mediterranean fleet.
Giovanni’s Cry Havoc boardgame
I think there is still some space for another couple of games if someone has any ideas or wants to take the initiative.
I have mailed all of the members, but I would appreciate mail confirmation.

I also have received some photos of the last Russo-Japanese naval game that are better than the pictures I did take, please enjoy them. 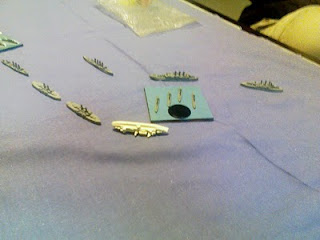 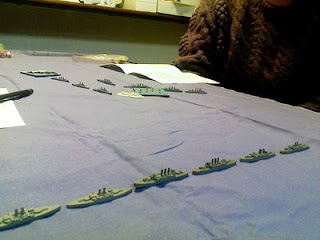 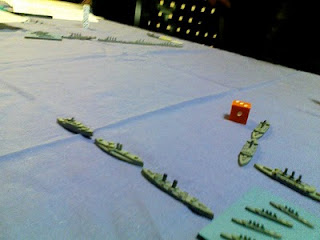 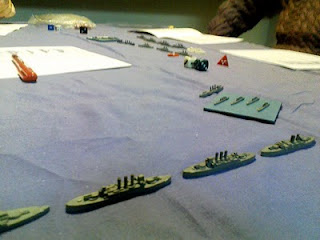 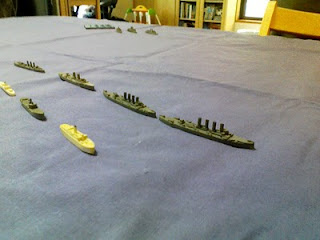